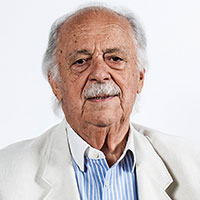 It is with the greatest sadness that Freedom Under Law (FUL) marks the death of board member, George Bizos. George was, in every sense, a majestic South African. He showed, at every turn, what law should and could be: humane, principled, decent, just. He will be remembered for his outsized role in opposing Apartheid’s injustices and in ushering in a new constitutional democracy. But his commitment to justice went far beyond South Africa’s borders. We at FUL will remember him, only a few years back, sitting in a magistrate’s court in Harare offering support and solidarity to those who faced politically motivated charges there.

George dedicates his book Odyssey to Freedom to “those who let me walk with them.” Hamba kahle, George. Now go walk among the giants.